Described in the Sonic Wings 3 strategy guide as a "zero-style super dreadnought tank," the Do-ni Revision first appears as a giant tank with a three-cannon turret. After taking some damage, the turret is destroyed to reveal a much more futuristic turret marked with the eyeball symbol of the Hildroid. The Do-ni tank may be related to the Hildroid Tank which serves as the first boss of Spinal Breakers. However, the two tanks are not identical.

While the Do-ni is not a real-world tank [1], its two-syllable name is similar to those of other World War II-era Japanese tanks [2]. The kanji 改 ("revision") appended to its name could refer to its ability to revise or change its shape. This kanji also appears on the flying craft associated with the Super XX and is part of its name: Super X Revision.

In the game data for Sonic Wings Special, the tiny version of Do-ni Revision is referred to as "Cario," which may be a shortened form of another name.  The name "Do-ni Revision" is found in the Sonic Wings 3 strategy guide, but it may refer only to the large version of the tank.

The Do-ni Revision is always the first boss of the game, attacking with its turret. However, if the player proceeds past the mid-game major boss fight to the level 9 version of the Tokyo stage, the Do-ni Revision appears as a minuscule tank. Despite its tiny size, it is somewhat more difficult to defeat here because its speed is greatly increased: it darts around the screen quickly, making it hard to damage. 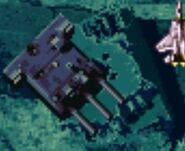 The wrecked Do-ni Revision in Sonic Wings Special.
Add a photo to this gallery

Retrieved from "https://sonicwings.fandom.com/wiki/Do-ni_Revision?oldid=8025"
Community content is available under CC-BY-SA unless otherwise noted.