Kotomi Kitashirakawa, whose name means "pretty little rabbit," is the granddaughter of Project Blue commander Lord River-n-White. Her older sister, Komomo Kitashirakawa, is the frequently-kidnapped princess of Bunnyland, and Kotomi is considered to be the "second princess."[1] Kotomi is devoted to her sister, although she gets impatient or frustrated by Komomo at times. After the events of Rabio Lepus, Kotomi joins the Bunnyland army in order to protect her sister.[1]

Kotomi has short brown hair, brown eyes in Rabio Lepus, and blue eyes in the Sonic Wings series. In the original Rabio Lepus, Kotomi wears a Playboy-style bunny girl outfit, but in Rabio Lepus Special, she wears a more modest full-body bunny suit. In the Sonic Wings games, Kotomi dresses more practically, wearing a tank top or a shirt and vest. She also wears caps with bunny ears on them. Her Sonic Wings attire is the uniform of the Bunnyland army.[2]

In Rabio Lepus, Kotomi Kitashirakawa is kidnapped along with her sister Komomo Kitashirakawa (princess of Bunnyland) and their grandfather Taro Kitashirakawa (king of Bunnyland). The family is rescued by the mechanical rabbits Rabio and Lepus. Unlike the other two members of the royal family, Kotomi's appearance changes greatly for the remake, Rabio Lepus Special: she looks much younger and is shown wearing a bunny costume rather than the sexier bunny-girl outfit from the original game.

Kotomi appears as one of the mahjong challengers, under the name Kitayami Fuyumi. As Fuyumi, she is a member of the tennis club; upon defeating her, the player wins a tennis racket.

After the final boss battle in singer-player mode, Lord River-n-White returns home to his two granddaughters, Kotomi and Komomo. They think he's only joking when he tells them about his adventures as a fighter pilot.

Kotomi's first appearance as a playable character comes in Sonic Wings 3, where she is a secret unlockable character. Komomo has been kidnapped once again, and Kotomi fights the enemy and searches the world to rescue her. After the final boss battle, Kotomi finally reaches Komomo... but the princess has already rescued herself with a very big gun.

In two-player mode, Kotomi is paired with "The Man," Gore. Kotomi asks Gore for help in rescuing her kidnapped sister. Their relationship is mostly business-like, although Kotomi calls him "gramps" once. After the final boss battle, they find the base where Komomo is being held. Gore goes in the front while Kotomi comes in the back-- just in time to see Gore kidnapping her sister. Gore escapes with Komomo, leaving Kotomi behind.

Kotomi returns in Special with a new outfit and longer ears, but she is still flying the Aka Usagi on a mission to rescue her sister, Princess Komomo. In two-player mode, Kotomi is again paired with "The Man," Gore.

As in Sonic Wings, Kotomi and Komomo are also shown as young girls if the player defeats Lar using Lord River-n-White in single-player mode.

Kotomi appears on a monitor in the background of the Kyoto stage.

From Gal's Island 3 from Gamest magazine.

From Pseudo Sky Rascals.
Add a photo to this gallery 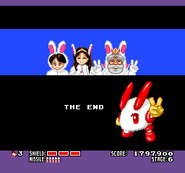 Retrieved from "https://sonicwings.fandom.com/wiki/Kitashirakawa,_Kotomi?oldid=8988"
Community content is available under CC-BY-SA unless otherwise noted.