Kowful is a man of few words, most of them being "Ha!" He created the robot pilot Tee-Bee A-10 with whom he fights in two-player mode in several games. Like Tee-Bee, Kowful is a cocky pilot who thinks he's the best in the world, and the two often argue over who is the best pilot. Kowful fights with River-n-White in Sonic Wings 3, and they share some game endings in other games. The two sometimes bicker, and Kowful teases River about his age, but overall they get along well. Kowful also has an antagonistic relationship with Tenukie Chaudo, who challenges Kowful and to whom he loses a fist fight-- twice. Besides creating Tee-Bee, Kowful also built Blaster Keaton's two robot bodies. Despite his appearance, Kowful is a brilliant scientist, and he is a bachelor.[1]

Hailing from Sweden, Kowful is a huge, muscular man who has fully embraced his Viking heritage. In Sonic Wings, he dresses in full Viking garb; in later games he wears pants and a white lab coat over his chest straps, although he still wears his Viking helmet when fighting. Kowful has dark brown, shaggy hair with a full mustache and heavy eyebrows; his eyes are blue. He is younger than he looks.[1]

Kowful laughs his way through single-player mode, declaring that he will be the "conqueror" just before the final boss battle. Afterwards, Kowful decides that because he is already the strongest person on Earth, he should go on "to the next planet". . . until he realizes that he can't get there in his jet.

In two-player mode, Kowful and the robot he created, Tee-Bee A-10, constantly argue over who is the best fighter. After the boss battle, they continue the argument, but it is revealed that they were actually only playing a Sonic Wings video game.

In the ending sequence for Mecha-Keaton and Silver, Silver brings Keaton's head to Kowful after Keaton's robot body has been destroyed, in order for Kowful to create another replacement body. Kowful seems a bit impatient with Keaton, asking if he's lost his body again. Tee-Bee A-10 is also present in Kowful's laboratory.

Kowful returns as a playable character in Sonic Wings 3; however, he flies together with Lord River-n-White. The odd couple is for some reason aligned with Germany for the first and only time for either of them. The two have a playfully antagonistic relationship: Kowful calls River old, but River declares he was stronger than Kowful when he was younger. After the final boss battle, it is revealed that River was testing a virtual reality game for Kowful. He complains that the somersaults in the game weren't realistic enough, after which Kowful grabs him and swings him around by his feet.

In two-player mode, Kowful and River fight with Malcolm. More than once, Malcolm declares them (or at least Kowful) to be fools, while River-n-White finds both of his partners to be rude. Once they've defeated the final boss, one of Malcolm's partners (likely Kowful) mentions that Malcolm has been busy since Tao Taido, while the other comments that he isn't familiar with the game. Malcolm decides to educate them by showing them his "desperation technique," one of his more sparkly poses. When Kowful declares that the pose looks stupid, Malcolm is infuriated and attacks them with his Malcolm Flash.

In Special, Kowful behaves much the same as he does in Sonic Wings; he's as rowdy and boastful as ever. In two-player mode, he is again paired with his robot Tee-Bee A-10. 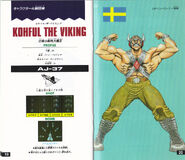 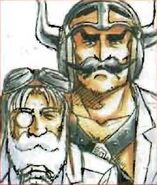 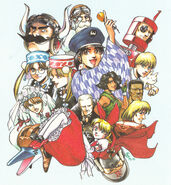 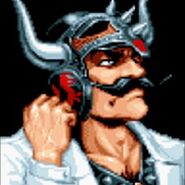 Kowful in an image from a 1996 Gamest magazine calendar.
Add a photo to this gallery 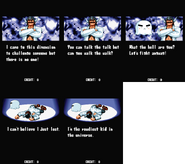 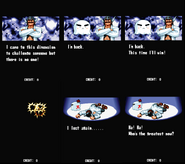 Retrieved from "https://sonicwings.fandom.com/wiki/Kowful?oldid=8776"
Community content is available under CC-BY-SA unless otherwise noted.