Although it was first released five years before Sonic Wings, the horizontally-scrolling shmup Rabio Lepus set the stage for the Sonic Wings series with its style of gameplay in addition to its cast of characters and bizarre enemies. In Rabio Lepus, the princess of Bunnyland, Komomo Kitashirakawa, has been kidnapped along with her sister Kotomi Kitashirakawa and their grandfather the king, Taro Kitashirakawa. The mechanical rabbits Rabio and Lepus rescue the royal family by fighting enemies on a spaceship, an asteroid, and the enemy's planet.

Rabio and Lepus would later appear as secret playable characters in Sonic Wings and in various cameos throughout the Sonic Wings series. Komomo and Kotomi also appeared in a few games, and the king returned in the guise of Lord River-n-White in nearly all of the series. Finally, the enemies Tenukie Chaudo and the Kame-Chargers served as a final boss in some Sonic Wings games, and the boss Fire Master is a minor enemy in Sonic Wings 3.

Note: The following codes should all be entered on the title screen. More than one "mode" can be active at a time; for instance, you can enter the code for Usagi 5 mode then the code for Shield 5 mode to get five lives and five shields at the same time.

Note: These addresses work for the Magic Engine emulator only.

The original version of Rabio Lepus was first released for the arcade in Japan. Used PCB/Jamma boards are usually available online.

Rabio Lepus was released in US arcades as Rabbit Punch. However, one major alteration was made: Kotomi and Komomo were completely removed from the game. No image of the kidnapped royal family is shown at the beginning, and while the king is rescued from the asteroid (and even though he mentions the princess there), no one is rescued from the spaceship and planet. Komomo's voice is heard saying "Arigatou, Usagi-chan," at the end of the game, but she is not shown.

In 1990, Rabio Lepus was re-released for the PC-Engine as Rabio Lepus Special. A comic included in the manual revealed that the kidnappers of the royal family were a legion of monsters. The gameplay changed slightly from the original Rabio Lepus; instead of being divided into three levels, the spaceship and asteroid were each a single level containing three bosses. A few of the enemies differed as well, and images of the royal family in their dialogue with Rabio were changed to what is arguably lower-quality art than in the arcade version. While the king and princess are roughly the same in appearance, Kotomi looks much different. She was an adult wearing a "bunny girl" outfit with a leotard and collar in Rabio Lepus; she now appears much younger and wears a full-body bunny costume like the king's. 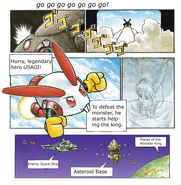 The Oretachi Geasen Zoku Sono series featured many classic arcade games rereleased for the Playstation 2, along with soundtracks and other extras. Rabio Lepus was the fourteenth game to be released in the series, which had earlier released Sonic Wings.

The Oretachi game included case, game disc, manual, "Rabio Lepus Official Guidebook Special Edition," replica of the arcade instruction flyer, trading card, soundtrack CD, and a DVD including a promo video, remix from the soundtrack, and playthrough of the game with Rabio.

A stage background in Rabio Lepus.
Community content is available under CC-BY-SA unless otherwise noted.
Advertisement