Volk is one of only two totally new characters introduced to the series after Sonic Wings 3 (the other being Hawk). One of the darkest playable characters in the series, Volk is a Russian cyborg who once worked for Fata Morgana. However, the enemy betrayed Volk and attempted to kill him, so Volk joined Project Blue and now seeks revenge on Fata Morgana. Volk's main enemy in the organization seems to be a human man with the ability to create android copies of himself.

In appearance, Volk is foreboding. He always wears a long, dark grey cloak covering his entire body, as well as a Russian ushanka. Volk has a mechanical right eye and left foot, as well as a tube that extends from and reenters the collar of his cloak. His single organic eye appears to be grey; his hair is a sandy blond and shaggy. Volk is always unshaven and has bushy eyebrows, one scar across his nose, and one under his left eye. He is shown with a cigarette in Sonic Wings Limited/Sonic Wings Special but not in Sonic Wings Assault.

Nicknamed "the Undead" and calling himself "the man who forgets death," Volk appears to be invulnerable. This is possibly due to his cyborg parts, which also allow him to move much more quickly than would be expected. Volk may have had these parts when he was with Fata Morgana, but another theory holds that they were given to him by Project Blue (and likely created by Kowful) after Fata Morgana betrayed him and tried to kill him.

Volk's motives are questionable; he claims to be following his personal vendetta against Fata Morgana and thus doesn't seem to care about Project Blue's mission, as long as he gets to fight. However, his description in the Sonic Wings Assault manual (see below) indicates that perhaps he just likes to destroy things!

The sketchbook Pseudo Sky Rascals indicates that Volk was partially inspired by the character Anatoly Gorodoku from the manga Panzerjager Wolf (狼の砲声). Gorodoku, who has a mechanical right eye, is the lieutenant of a Soviet Russian tank crew. Gorodoku is arrogant but an excellent soldier and respected by his subordinates. Volk was meant to be similar to Gorodoku in personality,[1] and Volk's mechanical eye resembles Gorodoku's. During the development of Sonic Wings Special, the developers even referred to Volk as "Gorodoku."[2]

Volk's design was also partially inspired by the character Lord Alberto from the anime series Giant Robo, which began in 1991. Like Volk, Alberto has a mechanical right eye. It could also be argued that, like Volk, Alberto was betrayed by the heads of his organization, and at the end of the series, he aids the heroes.

The Man from the Country of Ice
A man of much mystery, he always hides both hands in his coat, never taking them out under any condition. Because it is detailed in the internal affairs of the "Organization," it is rumored that he is a former soldier of the "Organization" who cannot die. Code name: "Volk the Undead."
-Sonic Wings Special Japanese game manual

Volk is paired with fellow Russians Chaika and Pooshika in two-player mode. He has little patience for them. . . especially for Pooshika, who sees him as a rival but still has a crush on him. Chaika, on the other hand, dislikes Volk and thinks he's crazy.

It is rumored that at one time, Volk was a solider for Fata Morgana. He is now in Project Blue because he is paid well and because he was betrayed by Fata Morgana, against whom he holds a personal grudge.

Volk fought in the latest disturbance. He requested to be dispatched ahead to sortie in Siberia in advance of the enemy landing force's bloodbath. He watched with satisfaction as the enemy ship blazed, then a signal came in.

"The enemy is defeated; the people of the world are rescued. The other members have gathered," said Lord White, Project Blue's captain.

"You know that for sure?" was all Volk said, then he flew away to the south seeking his next trophy. "The man who forgets death" (死を忘れた男) is Volk's nickname. Death and destruction are the finest wine to him. Perhaps vengeance and the like to the organization are no more than an excuse, after all.
-Sonic Wings Assault Japanese strategy guide

Volk has the alias of "the man who forgets death." He is a fearsome man who enjoys fighting. Because he likes fighting one-on-one, he'll scold the player that covers him and aims at the enemy plane to take advantage: "You're in my way!" When he gets angry, he transfers his anger to the enemy. . . . We're glad he's not our enemy.
-Sonic Wings Assault Japanese game manual

In Assault, Volk enjoys air-to-air dogfighting. He is voiced by Yosuke Akimoto in the Japanese version and Jeremy Schwartz in the English version. 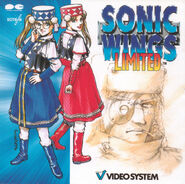 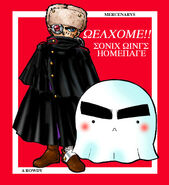 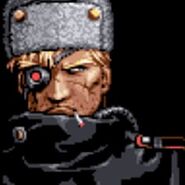 From Sonic Wings Special (translated).
Add a photo to this gallery

Retrieved from "https://sonicwings.fandom.com/wiki/Volk?oldid=9067"
Community content is available under CC-BY-SA unless otherwise noted.